This is a fast, pure-ruby implementation of an activity feed concept commonly used in social networking applications. The implementation is optimized for read-time performance and high concurrency (lots of users), and can be extended with custom backend providers. Two providers come bundled: the production-ready Redis provider, and a naive pure Hash-based provider.

What is an activity feed?

Activity feed is a visual representation of a time-ordered, reverse chronological list of events which can be:

Here is an example of a real feed powered by this library, and which is very common on today's social media sites:

What you publish into your feed — i.e. stories or events, will depend entirely on your application. SimpleFeed should be able to power the most demanding write-time feeds.

Building a personalized activity feed tends to be a challenging task, due to the diversity of event types that it often includes, the personalization requirement, and the need for it to often scale to very large numbers of concurrent users. Therefore common implementations tend to focus on either:

The first type of feed is much simpler to implement on a large scale (up to a point), and it scales well if the data is stored in a light-weight in-memory storage such as Redis. This is exactly the approach this library takes.

For more information about various types of feed, and the typical architectures that power them — please read:

The feed library aims to address the following goals:

First you need to configure the Feed with a valid provider implementation and a name.

Below we configure a feed called :newsfeed, which presumably will be populated with the events coming from the followers.

After the feed is defined, the gem creates a similarly named method under the SimpleFeed namespace to access the feed. For example, given a name such as :newsfeed the following are all valid ways of accessing the feed:

You can also get a full list of currently defined feeds with SimpleFeed.feed_names method.

Reading from and writing to the feed

For the impatient here is a quick way to get started with the SimpleFeed.

As we've added events for this user, we can request them back, sorted by the time and paginated. If you are using a distributed provider, such as Redis, the events can be retrieved by any ruby process in your application, not just the one that published the event (which is the case for the "toy" Hash::Provider.

The Two Forms of the API

The feed API is offered in two forms:

The method names and signatures are the same. The only difference is in what the methods return:

Please see further below the details about the Batch API.

In the examples below we show responses based on a single-user usage. As previously mentioned, the multi-user usage is the same, except what the response values are, and is discussed further down below.

Let's take a look at a ruby session, which demonstrates return values of the feed operations for a single user:

You can fetch all items (optionally filtered by time) in the feed using #fetch, and you can #paginate and reset the last_read timestamp by passing the reset_last_read: true as a parameter.

This API should be used when dealing with an array of users (or, in the future, a Proc or an ActiveRecord relation).

There are several reasons why this API should be preferred for operations that perform a similar action across a range of users: various provider implementations can be heavily optimized for concurrency, and performance.

The Redis Provider, for example, uses a notion of pipelining to send updates for different users asynchronously and concurrently.

Multi-user operations return a SimpleFeed::Response object, which can be used as a hash (keyed on user_id) to fetch the result of a given user.

The library offers a convenient DSL for adding feed functionality into your current scope.

To use the module, just include SimpleFeed::DSL where needed, which exports just one primary method #with_activity. You call this method and pass an activity object created for a set of users (or a single user), like so:

The DSL context has access to two additional methods:

Below is an example output of color_dump method, which is intended for the debugging purposes. 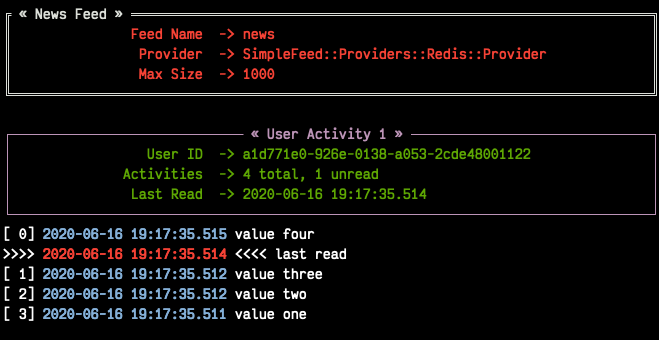 For completeness sake we'll show the multi-user API responses only. For a single-user use-case the response is typically a scalar, and the input is a singular user_id, not an array of ids.

Each API call at this level expects an array of user IDs, therefore the return value is an object, SimpleFeed::Response, containing individual responses for each user, accessible via response[user_id] method.

A provider is an underlying implementation that persists the events for each user, together with some meta-data for each feed.

It is the intention of this gem that:

Each provider must implement exactly the public API of a provider shown above (the Feed version, that receives user_ids: as arguments).

Two providers are available with this gem:

If you set environment variable REDIS_DEBUG to true and run the example (see below) you will see every operation redis performs. This could be useful in debugging an issue or submitting a bug report.

Source code for the gem contains the examples folder with an example file that can be used to test out the providers, and see what they do under the hood.

To run it, checkout the source of the library, and then:

The above command will help you download, setup all dependencies, and run the examples for a single user:

If you set REDIS_DEBUG variable prior to running the example, you will be able to see every single Redis command executed as the example works its way through. Below is a sample output: 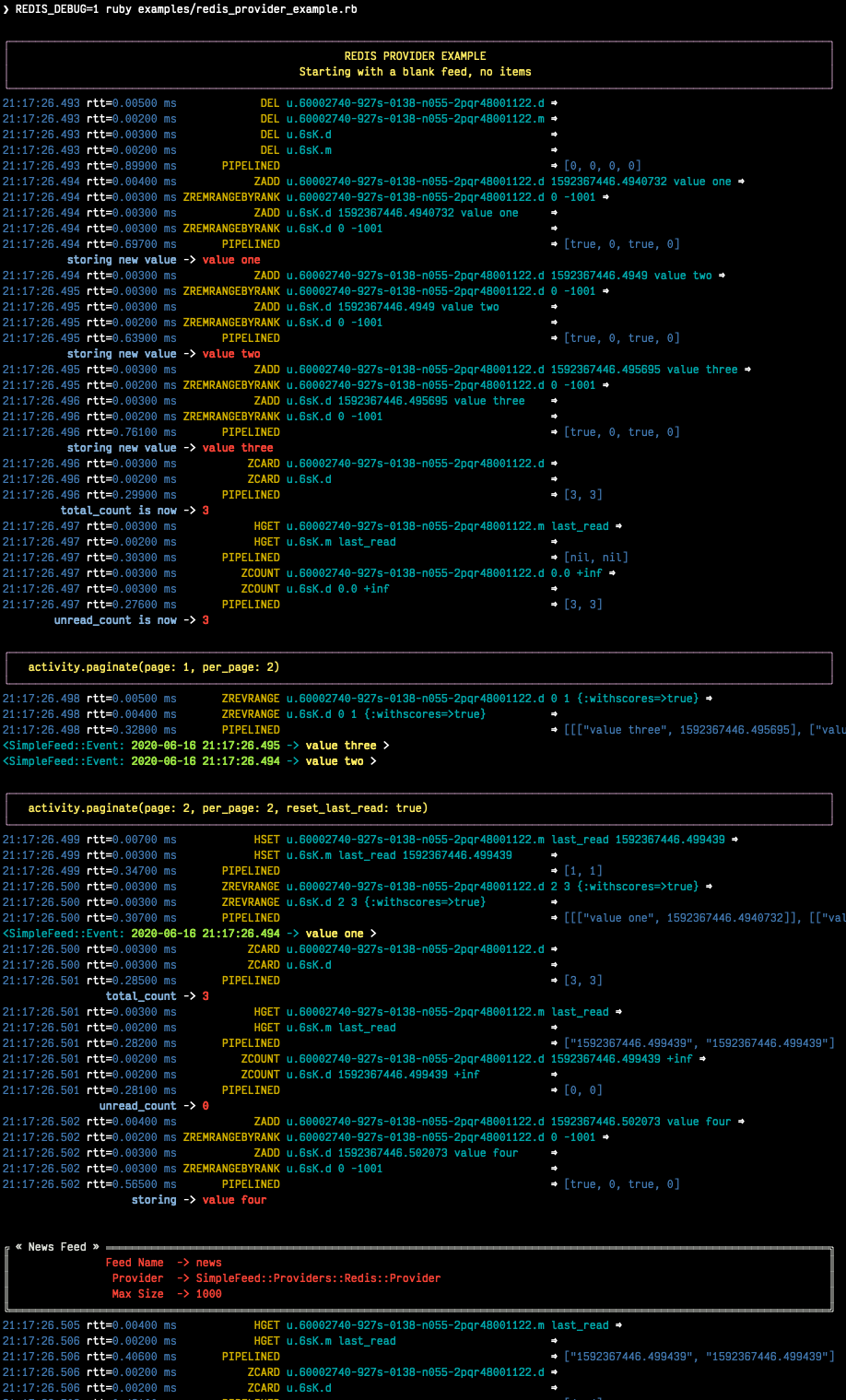 This should use Yard to generate the documentation, and open your browser once it's finished.

Add this line to your application's Gemfile:

Or install it yourself as:

After checking out the repo, run bin/setup to install dependencies. Then, run rake spec to run the tests. You can also run bin/console for an interactive prompt that will allow you to experiment.

Bug reports and pull requests are welcome on GitHub at https://github.com/kigster/simple-feed

The gem is available as open source under the terms of the MIT License.